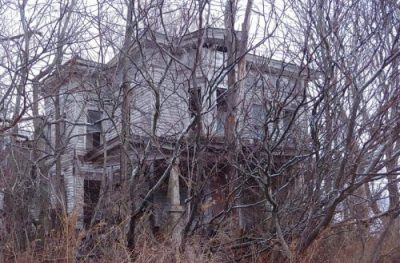 The Bones Of Winter

Sometimes it’s hard to defend the desirability of living in central New York, especially during a winter thaw or in early spring when gray skies hang low, snow is reduced to a brown-scabbed crust, and barren tree limbs offer nothing to soften the bleak monotone.

These are the times we see through to the bones of things – the once stately home crumbling in the thicket, an abandoned church on a lonely country road, a path to a long-gone somewhere disappearing into the woods.

Central New York and much of upstate is a region of contrasts. In cities, small towns, and throughout the countryside, one can find beautiful places both old and new while directly next door to them might be properties in a state of dereliction and decay. CNY has some prosperous communities, but it’s no secret much of the region has seen better days, particularly when United States industry was strong and the verdant countryside, considered a breadbasket for the country, allowed small farms to thrive. But for decades now economic and cultural forces have been such that many small-town and rural areas throughout New York continue to lose population as good jobs dry up and main street businesses go dark.

Added to this, there’s long been a mood of pessimism among the populace – a regional inferiority complex in which the default is to complain about high taxes, the snow, and the lack of sun – to believe the up-and-comers are justified in leaving for opportunity and culture only found elsewhere.

Despite the economic challenges and the sometimes dreary seasonal conditions, I’m happy to oppose this sentiment. I love living here and see many great reasons why others could love it and make great lives for themselves here, too. The contrasts, the history and variety of natural beauty, the four distinct seasons, the fascinating people and the room for new things – all make a rich ground for creation, discovery and rebirth. Though there’s a long way to go, I see evidence others are starting to invest in the possibilities here, too, as new farming models like farm wineries and agritourism gain a foothold, high tech industry like the Cree silicon carbide semiconductor plant moves in, and the arts expand and flourish.

Some municipalities are even employing unique methods to fill and revitalize old abandoned buildings and homes. Recently an effort to preserve the enchanting Seymour Mansion in Auburn made national news. The city purchased the foreclosed property and will awarded it at low cost to whoever presents a restoration and usage plan most advantageous to the community, and I can’t wait to see the outcome.

But while I love vibrant, well-kept places and am an enthusiastic champion of restoration and revitalization, I also find beauty and poetry in decay itself – the material remnants of ways of life too far gone to be saved. This is the season when local ruins become seedbeds for my memory and imagination. I wonder over the life they once nurtured, the weddings and funerals officiated within their walls, the secrets buried in their undergrowth, the people who live elsewhere but whose lineage came through them. I love how the sight of their remains intensifies my sense of continuity and place, how it enchants my wondering over the possibilities, solid and intangible, yet to be manifest because of them -- to be found, written, and reclaimed.

6 comments on “The Bones Of Winter”